I paint to never die

Born in Abarán, Murcia (Spain), in 1985, Bran Sólo defines himself as a “Good person, painter, illustrator, designer and photographer, as well as many other things I never wanted to be“.

Graduated in 2006 in Computer Applications Development and Database Analysis, he worked for seven years in the technology sector.

In 2010 he participated in the official programme of parallel events of the European Biennial of Contemporary Art Manifesta, in its eighth edition, with an exhibition at the Casas Consistoriales space in Mazarrón.

In 2012 he decided to abandon his work as a computer programmer and lifestyle to devote himself to drawing and enroll in the School of Art of Murcia, leaving behind family, couple and home and moving alone to a studio in the city of Murcia.

It is in the same school where he discovers that an eye disease, of unknown origin, conditions his perception from childhood. A macular lesion, formed by scars in the central area of the retina, distorts the images in a way that it describes as “kaleidoscopic“, sharply multiplying the images with high contrast or brightness. In this way, he discovers that he cannot certainly find the line that separates a white area from a black one, confuses volume with emptiness, the positive with the negative and, except in specific light circumstances, perceives all objects multiplied up to eight or ten copies, depending on distance, and especially those that are luminous, making it difficult to visualize screens and projections as well as elements that emit or reflect moderate amounts of light. This condition, which forces the brain to interpret reality very subjectively, gives it a “unique vision”, which he sustains with humour “is the most important quality that an artist must have“.

He finished his studies in 2014 and graduated in Plastic Arts and Design in Illustration, presenting in his final project the Tarot de Laguna by which he is qualified with the highest score of the jury, which grants him an Erasmus scholarship that takes him to Oporto.

After his stay in the Portuguese city, he moved to Madrid where he officially began his artistic caree. He moves in 2015 to Barcelona where he continues his work.

In 2015 he holds his first solo exhibition: “Perfume de flor de cuchillo” in Kipfer&Lover, Malaga, which is a great success.

He returns to Murcia in 2016 where he currently resides.

From that moment on, his career advances exponentially and in a short time he manages to show his work at the Carmen Thyssen Museum in Malaga, at the ESTAMPA fair in Madrid, at the gallery NB7 of the FLECHA fair in the same city, as well as in other spaces such as Échale Guindas Galería, Matraca Gallery, VillaPuchero Factory, Factoria de Arte y Desarrollo, Swinton & Grant, The Folio Club, The Folio Club, Nigredo Espacio, El Gallinero or Vergel Espacio.
In addition, he collaborates with the publishers of 180hilos, exhibiting works in serial edition at MACBA and CCCB in Barcelona, CAIXA Forum Madrid and at the Centre Pompidou in Malaga, as well as ARCO Art Fair 2018 (Llibreria Laie Stand) and manages to find a niche in specialised shops and art galleries inside and outside Spain.

In 2018 he publishes for sale the Tarot de Laguna, a research and personal development work based on the fundamentals of psychoanalysis.

He is currently researching the relationship between science and art, which he says is “inseparable from me“, as well as being interested in the graphic study of other subjects such as masculinity, fear and human emotions, love and blindness. 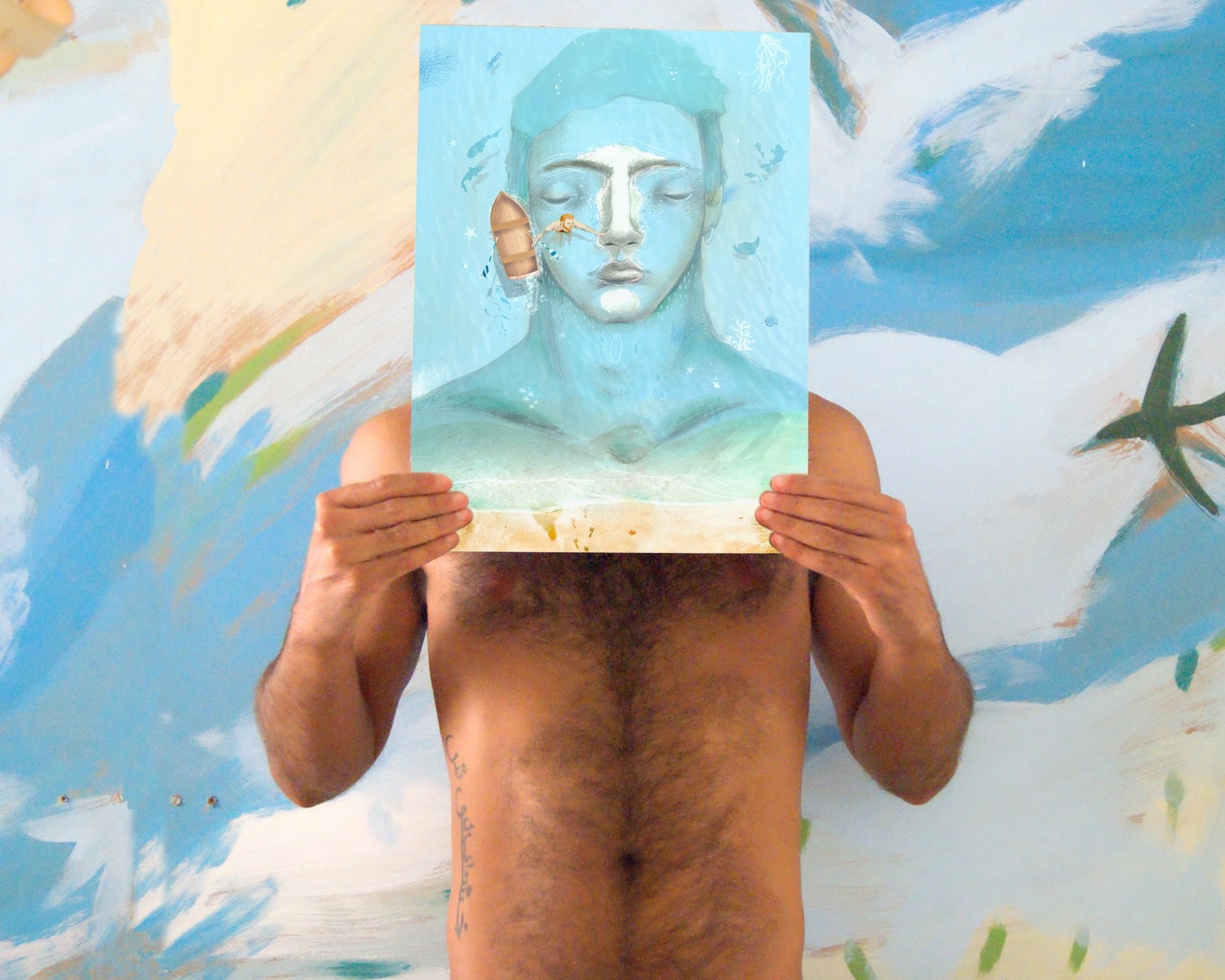 The protagonists tend to be characters from his surroundings and models that he usually photographs in his studio, predominantly men, with a melancholic, pessimistic and solitary character, which is the main subject dealt with in most of his works.

Bran Sólo is a lover of the sea, linking its color palette to the Mediterranean.

He usually replaces the shape and colour of the human body with a blue colour like the sea, on backgrounds reminiscent of the fine sand of some of the Mediterranean landscapes in which he gets inspired.

The idea, based in part on the essay by the Belgian philosopher and art historian Hippolyte Fierens-Gevaer entitled Contemporary sadness: essay on the great moral and intellectual currents of the nineteenth century, inspires Bran to work on the feeling of loneliness, of feeling different, excluded and rejected in a pessimistic, exhausted environment, where faith in humanity, and therefore in oneself, has been lost.

“To doubt, not of the existence of God, but of the presence of a divine virtue in human acts, is the highest form of contemporary sadness”. (Hippolyte Fierens-Gevaer)

The 2017 Ansak series of illustrations reflects this pessimistic character through his inexpressive, slightly melancholy, dark portraits of faces that, although deformed by the emotions of the portrayed character, do not fail to convey the forgotten beauty behind the pain and fear that seems to drown the model. 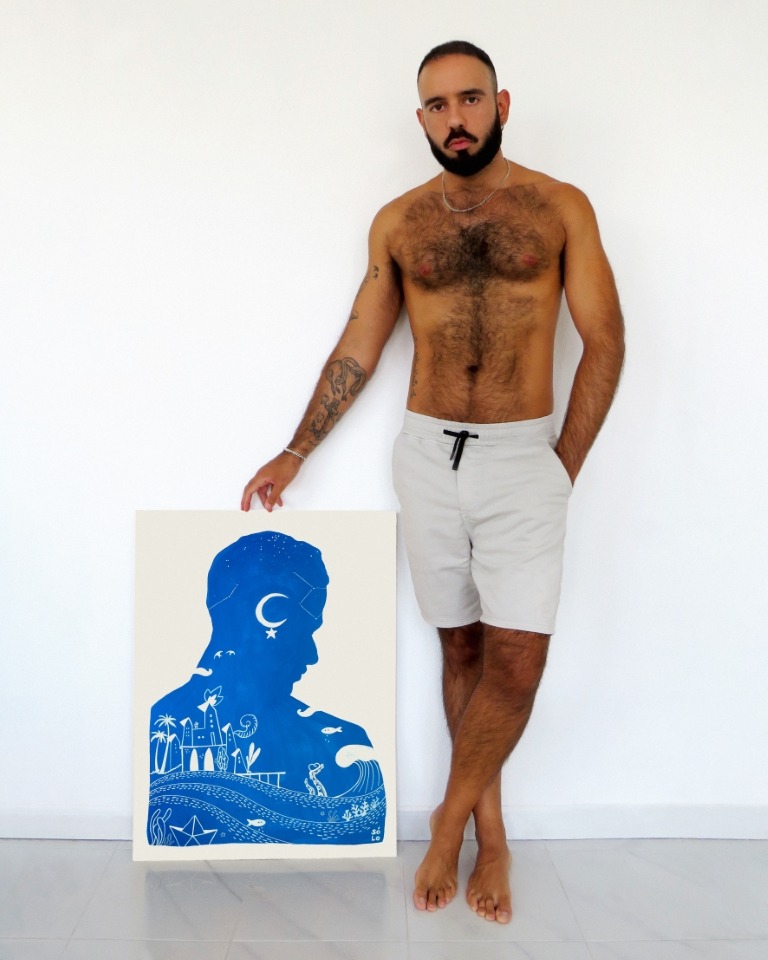 The theme that worries the painter the most is solitude, reflecting it even in his name with a “o” with a tilde (the one of “Sólo”) that more reminds to an adverb of quantity than to an adjective of company in the spanish language.

“It is not about loneliness in the context of dependence on a partner or family, but it refers to the feeling of being unable to find or return home, to connect with other people or simply to feel overwhelmed by the brutal scenery that nature, as majestic as it is perverse, holds for us”.

It is possible that the visual circumstance that characterizes Bran’s personality aggravates this feeling of loneliness, creating a ghostly and hostile scenario, empty of humanity.

Is this characteristic, which makes any person who moves more than a few centimetres away into a shadow, reaffirms the painter’s need for the physical, for touch as a substitute for vision (hence symbols such as the hand with an eye in the palm), and for the value of the company and the exchange of visions.
Affection, admiration, connection, protection and commitment are recurring themes and inspirational motives for the symbology that appears in his works.

In 2017, together with his inseparable partner Daniel “El Dibujo”, he founded the Circulo de Artistas Paloma Negra, with the aim of giving visibility to a group of artists with a message and a concept of similar artistic work, fleeing from the artistic emptiness created by the Contemporary Art Market.
Paloma Negra’s discourse begins with the phrase “Not everything is worth”, as a reference to the loss of meaning that the art of the contemporary movement has experienced after the rise of the artistic avant-garde.

In addition, Paloma Negra focuses on the figure of the artist as an experienced composer, a being with a different sensibility that far from pursuing fame, profitability and recognition at all costs, focuses its attention on his work, providing it with message and technique, emotion and meaning, and returns the value to the artistic work, giving it the unique and personal impression of the composer.

2022 Participation in the exhibition A NUMBER OF CLOUDS in Échale Guindas Galería, Madrid.

2022 Participation in the SEXUALITES exhibition at ODD QUEER KIOSK, Barcelona.

2021 Participation in the Montpellier Contemporary Art Salon, with the gallery Patrick Bartoli, from Marseille. Montpellier, France.

2021 Group exhibition PRIDE on the occasion of the LGTBI+ PRIDE of BARCELONA 2021 held at Bar La Federica, Barcelona.

2021 Group exhibition PRIDE BY YOUR SIDE, the exhibition in support of the LGBT+ community online. In collaboration with QUEEF MAGAZINE, PRIDE MAGAZINE and FALO MAGAZINE. Curated by FMB Art Gallery, shown online and at Afnakafna gallery and Freeda gallery, Rome.

2019 Group exhibition on the occasion of the Wizard of Oz 80th anniversary at Ficciones, Murcia. Spain.

2019 Group exhibition on the occasion of the BARCELONA ORGULLO LGTBI+ held at Bar La Federica in Barcelona. Spain.

2019 Group exhibition on the occasion of the ROMA LGTBI+ PRIDE celebrated in LARGO VENUE, in Rome. Italy.

2019 Group exhibition at the BERKANA Bookstore Stand on the occasion of the Madrid Book Fair for the signing of the book “Call me by your name” by André Aciman, Madrid.

2018 Exhibition “FRENTE A FRENTE” together with Daniel “El Dibujo” and curated by 180 hilos at Café Miau space, Madrid. Spain.

2017 Group exhibition “Frankenstein is not the monster“, curated by Zony Gómez at the Nigredo Espacio gallery, Madrid. Spain.

2017 Group exhibition “WHEN YOU ARE A STRANGER” in Échale Guindas Gallery, Madrid. Spain.

2014 Group exhibition of photography and illustration on stone DISONANTES, organized by the photographer Lorena Velasco in the space LAB (Laboratory of Young Art), Murcia. Spain.

2014 Selection of the jury as finalist in CREAJOVEN Murcia 2014 in the photography category.

2014 Scholarship of illustration with Inês Oliveira in Porto, Portugal.

2014 Group exhibition on the occasion of the Woman Day by the School of Art of Murcia in the Centro Cultural El Carmen, Murcia. Spain.

Mentions in the media